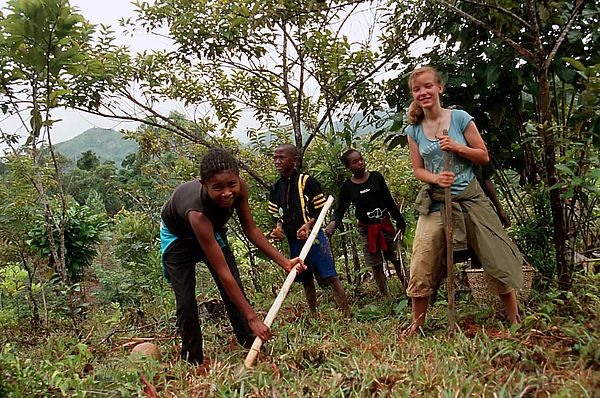 in eastern Madagascar and in the eastern Erzgebirge Mountains!

Science has calculated: there are three million trees in the world. That sounds like an enormous amount! But not long ago, there were twice as many trees.

Once in the Erzgebirge (Ore mountains), at the border between Eastern Germany and Czech Republic, the forests died because of the poisonous emissions of power plants and industrial facilities. Reforestation has been a huge struggle, and many young people, too, have taken part in planting activities. Today the worst wounds of the forests are healed.

But still trees are disappearing at an alarming rate in other parts of the world, plants and animals are losing their habitats. For example: on the island of Madagascar. Only here Lemurs can live - and most of those cute monkeys need forests. They are among the species threatened with extinction, along with many species of chameleons, frogs, butterflies only found on Madagascar. Especially the tropical rainforest at the eastern side of this island is a true treasury of biodiversity.

Together, young students from Altenberg in the German eastern Erzgebirge mountains (the "Friends of Madagascar Group" of the "Glückauf" secondary school) and from Anjahambe in the eastern Madagascar province of Tamatave/Toamasina (the "Analasoa Club") do their best to preserve and restore forests. They get support from the rainforest initiative Ranoala of Dresden.